Mid May to July 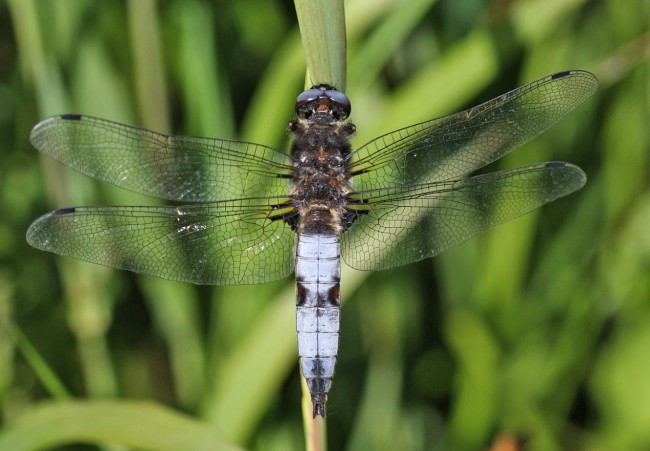 The abdomen is broad, but tapers considerably from segments 8-10. There is grey-blue pruinescence from segments 3-7 whilst segments 1-2 and 8-10 are black. The thorax is a dark brown with no antehumeral stripes. The wings are clear with small but present basal patches of colour. The wing tips often have small brown ‘smokey’ marks and the pterostigma are brown. The eyes are blue grey and the legs are black. Immature males are tawny-orange with a black median line which thickens from segments 4-9 to form bell shapes like the female. As males mature the blue pruinescence spreads across the abdomen creating a ‘sunset’ where the blue mixes with the orange on the sides of the abdomen. Older specimens may well have dark patches on the abdomen where female legs have rubbed off the pruinescence during copulation. 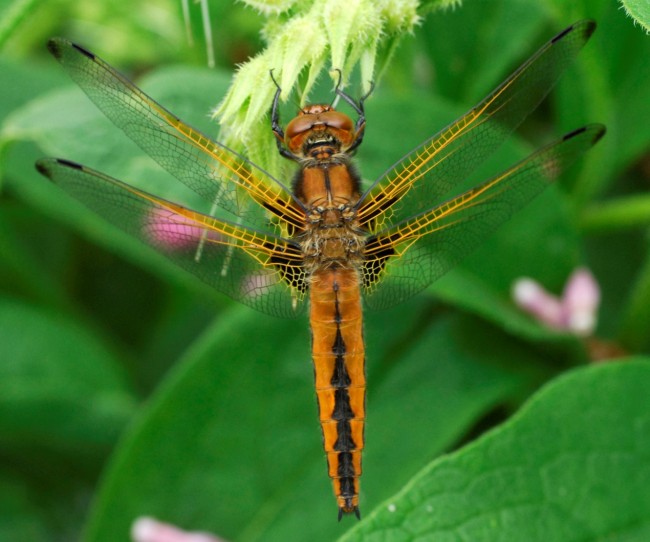 The body is tawny orange with dark bell shapes extending down the abdomen. Females darken with age and may even develop bluish pruinescence. The eyes are brown. The wings are similar to the male but also have a suffusion of yellow-orange from the base almost to the pterostigma.

Black-tailed Skimmers are similar but have clear wings lacking any basal patches of colour. Broad-bodied Chasers have much larger basal wing patches and clear broad antehumeral stripes. Four-spotted Chasers though similar in colour to immature males and females should be easily distinguishable by the four wing spots.

Males select a perch in a prominent place on a waterside plant from where they fly out to investigate and return. They do establish territories, but are not as aggressive as other chasers and if space is limited several males will occupy a small area. When a female is found the tandem pair move to emergent vegetation where copulation takes place which can be quite prolonged. Females then oviposit alone but with the male in close attendance. Eggs are washed off or flicked off the abdomen.

Typically found in slow flowing rivers and streams in water meadow areas. Sometimes in abandoned canals, lakes, ponds, ditches and gravel pits. These habitats must be rich in emergent vegetation at their borders and also have open areas of water.

Only 1 record of this species has ever been made in Shropshire on 20th June, 2008. The specimen was observed on the River Tern at Attingham Park and a number of good photographs validated the record. As the name Scarce Chaser suggests this species has a limited localized distribution in Great Britain. The recently published Atlas of Dragonflies in Britain and Ireland (Cham et al., 2014) however describes a significant spread of this species in particular in the south-west Midlands, Somerset and Devon. It is certainly possible that this species will be recorded again in Shropshire.

Most likely to spot this local rarity on muddy slow flowing rivers with dense emergent and marginal vegetation, from early May onwards.