common in the south, local elsewhere 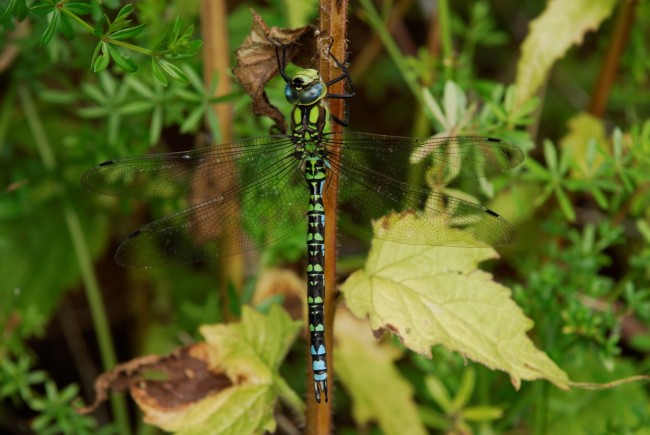 The abdomen is black with paired spots on the segments turning from apple green to blue as one extends down the body. Distinctively the spots on segments 9-10 are fused to form continuous bands of colour. A yellow triangle is also visible on segment 2. The yellow/green antehumeral stripes are very broad and striking and are more oval in shape. The sides of the thorax are green with broad black stripes. The eyes are blue and legs are mostly black but with some brown on the femur. Wings are clear with short black pterostigma, but with maturity they develop a suffuse yellow tint. 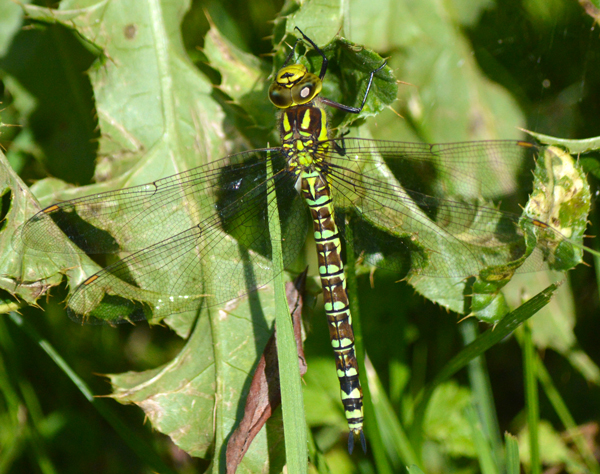 The abdomen is very similar to the male but is brown in colour with apple green spots. Again these spots fuse to form continuous bands of colour on segments 9-10. The pterostigma are brown.

Hairy Dragonfly, Common and Migrant Hawkers are all similar species found in Shropshire. None of these species however have continuous bands of colour replacing paired spots on segments 9-10 of the abdomen.

A large and very inquisitive dragonfly often as keen to identify you as you are it! Often seen well away from water hawking for insect prey along hedgerows or woodland edges. Mature males defend a territory of some 50m (Brooks & Cham, 2014) and tend to fly quite low amongst waterside vegetation when searching for a female. Once successful the male clasps the female and adopts the mating wheel position before flying off to perch high up on a tree branch where copulation takes place and lasts for up to 2 hours. The female subsequently oviposits alone inserting her eggs into floating or emergent vegetation or even damp moss at the waters edge. During this process the wings are kept vibrating and a rustling noise can often be heard.

Prefers lakes ponds and canals that have woodland close by and are well vegetated.

Historic records date back to 1917 with a sighting at The Albynes, Nordley (north west of Bridgnorth). A further record was made in 1962 at Clarepool Moss before the 1970’s brought a good number of records across the county including Whixall Moss in the north and Silligrove Pool down in the Wyre Forest. Butler (1982) commented on the recent spread of Southern Hawker being recorded in acid upland pools and not just confined to the lowlands. This is still the case today with regular sightings at both lowland canals and waterbodies and upland ponds such as Wildmoor Pool. Described as common by Lockton et al., (1996) this species remains common and widespread in Shropshire. The current distribution map shows much infilling within an already established range. This is noticeable particularly in the north west of the county possibly due to increased recorder effort though the recent National Atlas (Cham et al., 2014) does highlight the range expansion into northern England (and Scotland) and Wales- seemingly unhindered by high ground. 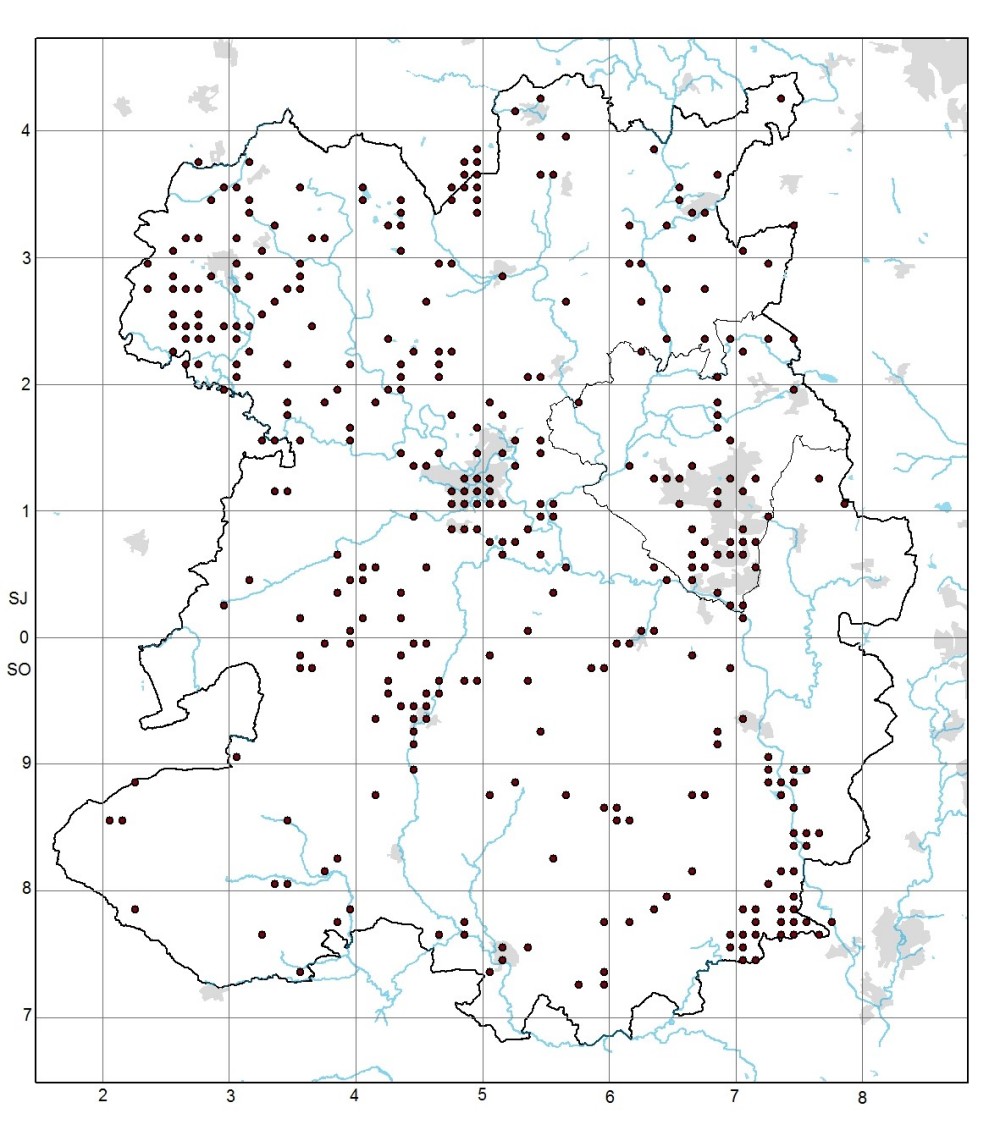 All over the county (!) and quite likely to be emerging from your garden pond. 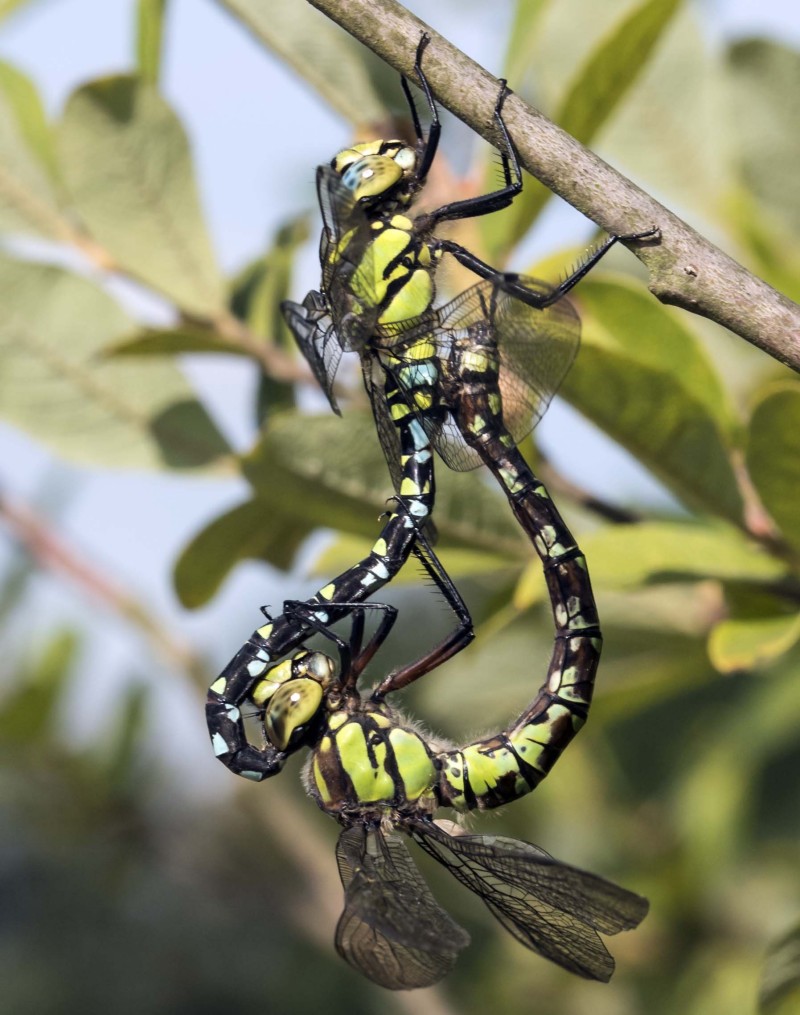