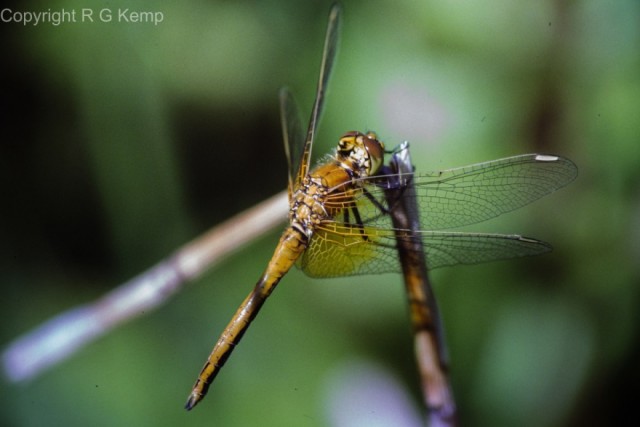 The photograph shows an immature male which does not illustrate all the mature features. In mature males the parallel sided abdomen is bright orange with 2 black mid-dorsal lines on segments 8-9. The underside is black. The thorax is reddish brown on top and the sides are yellowish. The frons is red with a dark line extending down the sides. The eyes are reddish brown above and yellow below. The legs are black with a yellow stripe running down the length. The wings are extensively saffron yellow over much of the basal area, sometimes spreading out to the nodes. The pterostigma are red brown and outlined in black. Please get in touch if you have a photograph of a mature specimen. 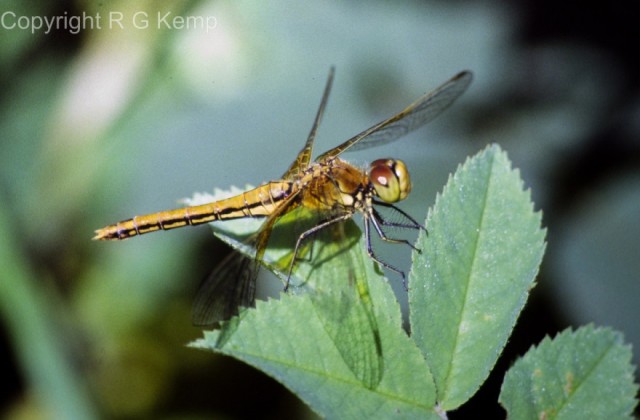 The abdomen and top of the thorax are yellow brown with yellow sides. Two black mid dorsal lines are present on abdominal segments 8-9 as in the male and a continuous black line runs along the side. The base areas and often the node areas of the wings are suffused yellow. The legs are dark with a light stripe running down the length. The frons is yellowish with a black line running down the sides.

This is a very rare migrant species in Shropshire. With striped legs confusion is possible with Common Darter and another very rare migrant, the Red-veined Darter. The Common Darter does not have a black line extending down the side of the frons or continuous dark markings down the side of the abdomen. The Red-veined Darter has blue colouration on the lower half of the eyes and a solitary single stripe on the thorax side.

There is one very historic record of this species made at Prees in 1945. All other records of this rare migrant were made in the mid 1990’s when there was reportedly a large invasion(!) into the UK (Smallshire & Swash, 2014). At this time individuals were recorded at Whixall Moss, Cramer Gutter, Wildmoor Pool (Long Mynd), Walford Pool and Menutton pond (just north of Knighton). Interestingly an individual was also recorded at Steel Heath in 1995, just north of the much earlier record at Prees. During the mid 1990’s some breeding took place in parts of the UK, but populations have not been sustained. Yellow-winged Darter is known to be an ‘irregular immigrant’ and with some individuals being recorded in the UK more recently in 2006 it is always worth bearing in mind. 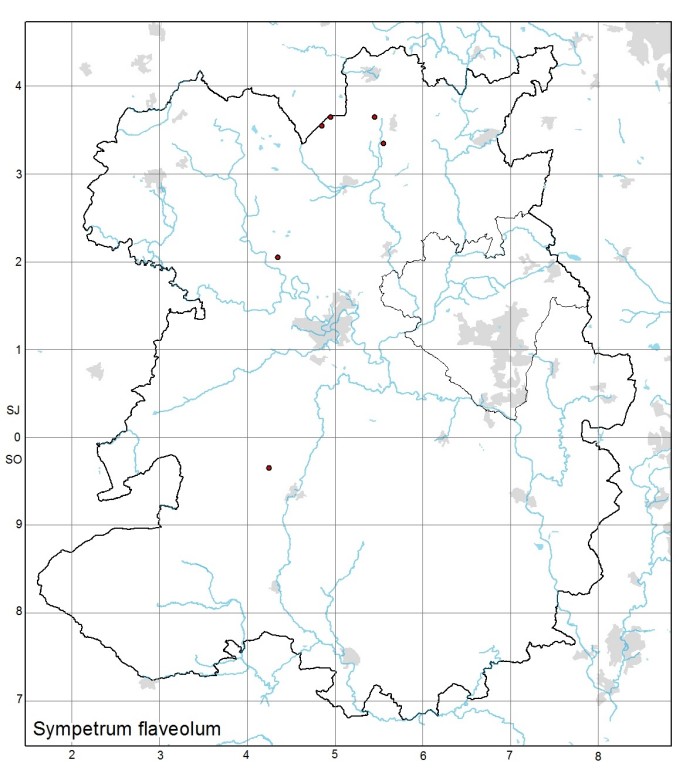 Future migrants likely to occur in areas similar to previous sightings such as Whixall Moss, the Long Mynd, Catherton Common.