All posts by admin 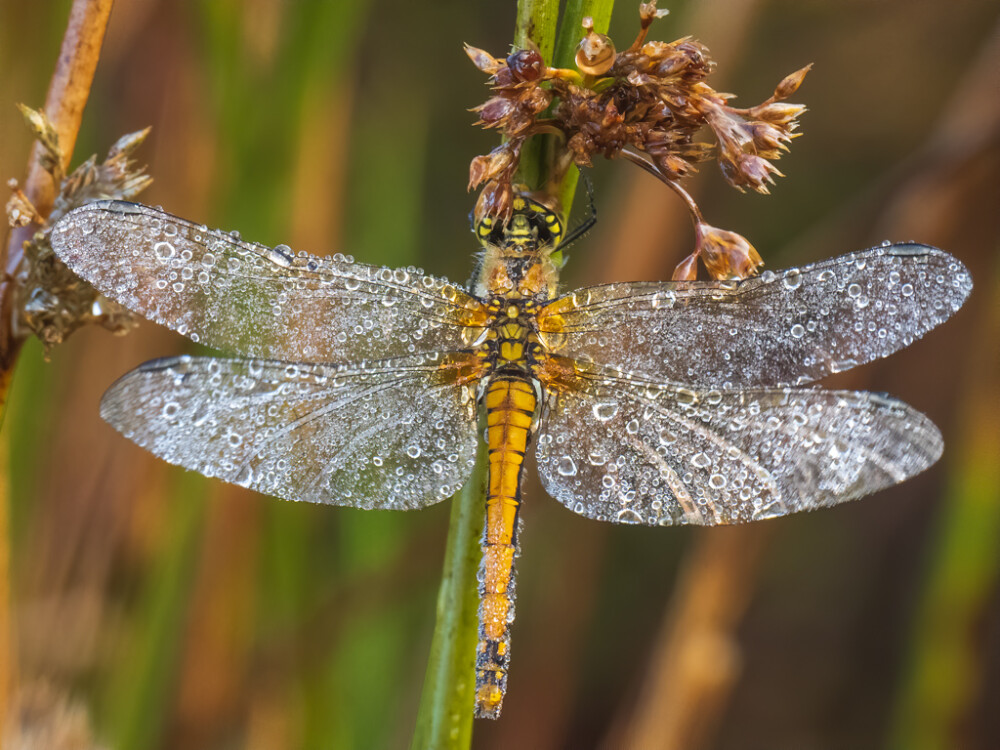 Andrew Fusek Peters has sent in some truly stunning photos taken on 29th September on the Long Mynd. Andrew took these pictures at dawn and has been rewarded with the amazing spectacle of dew on the the wings of these autumn regulars. A female Black Darter is picture left and Emerald Damselflies below- the female with brown and emerald coloration and the male (far below) with a beautiful powder blue pruinescence on the thorax. 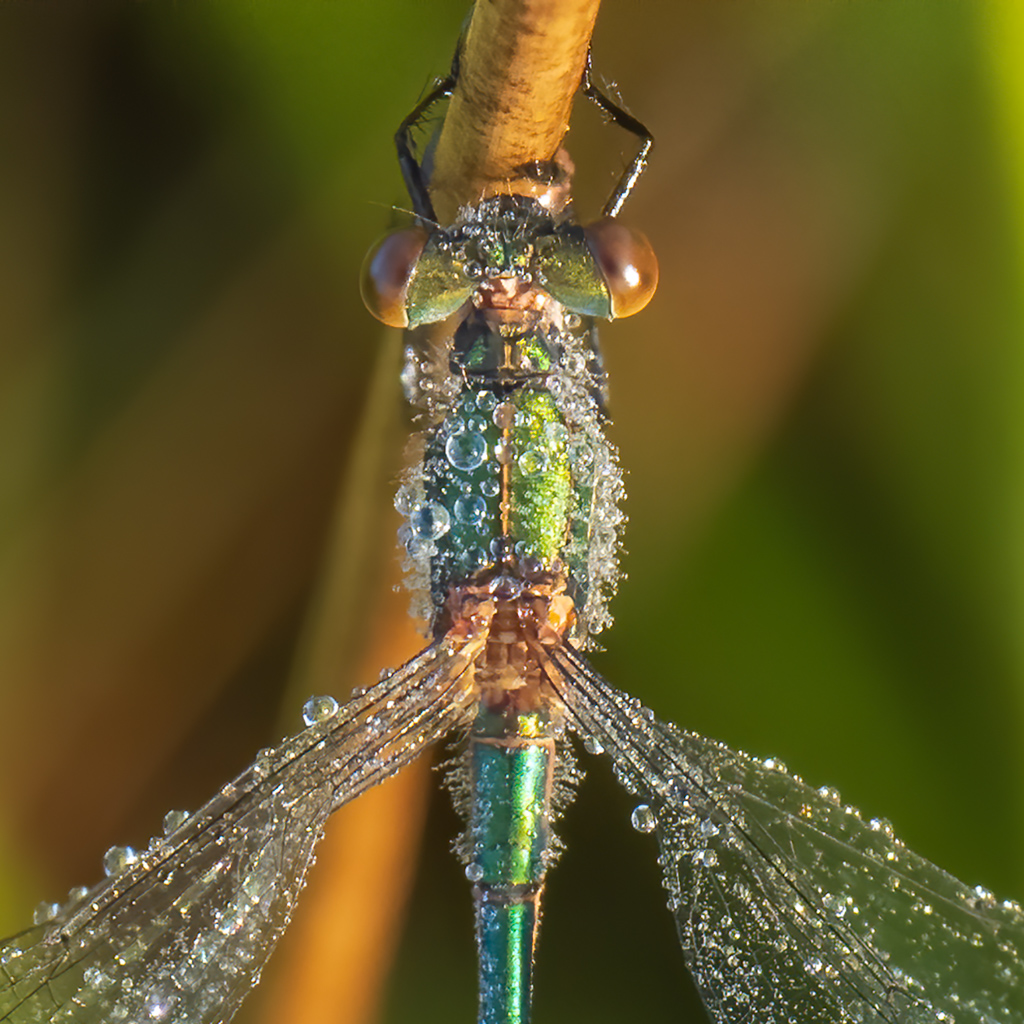 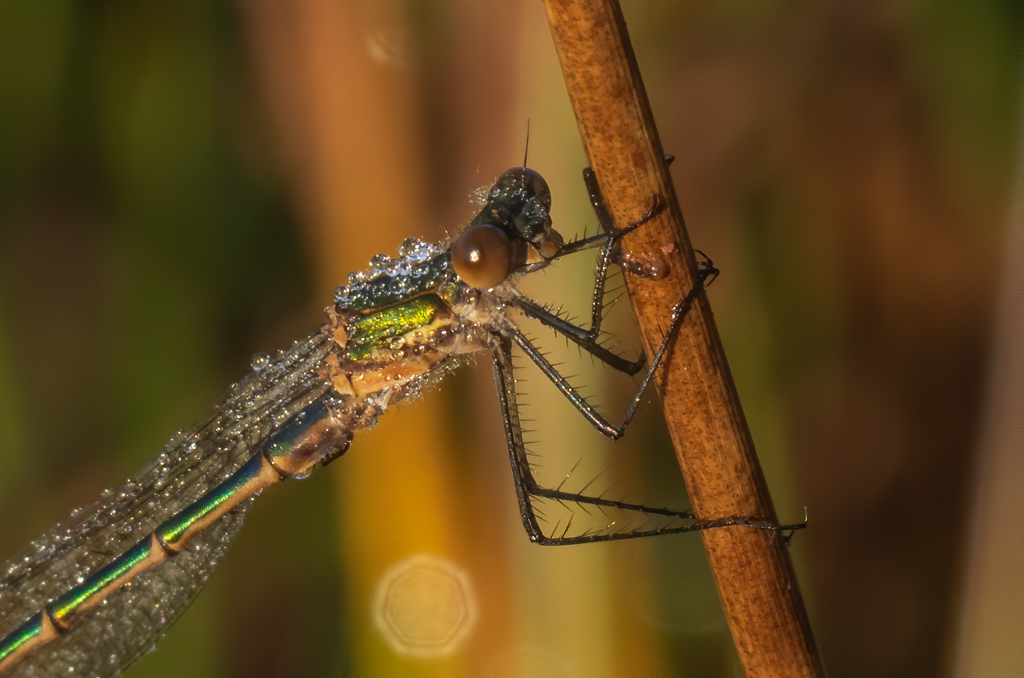 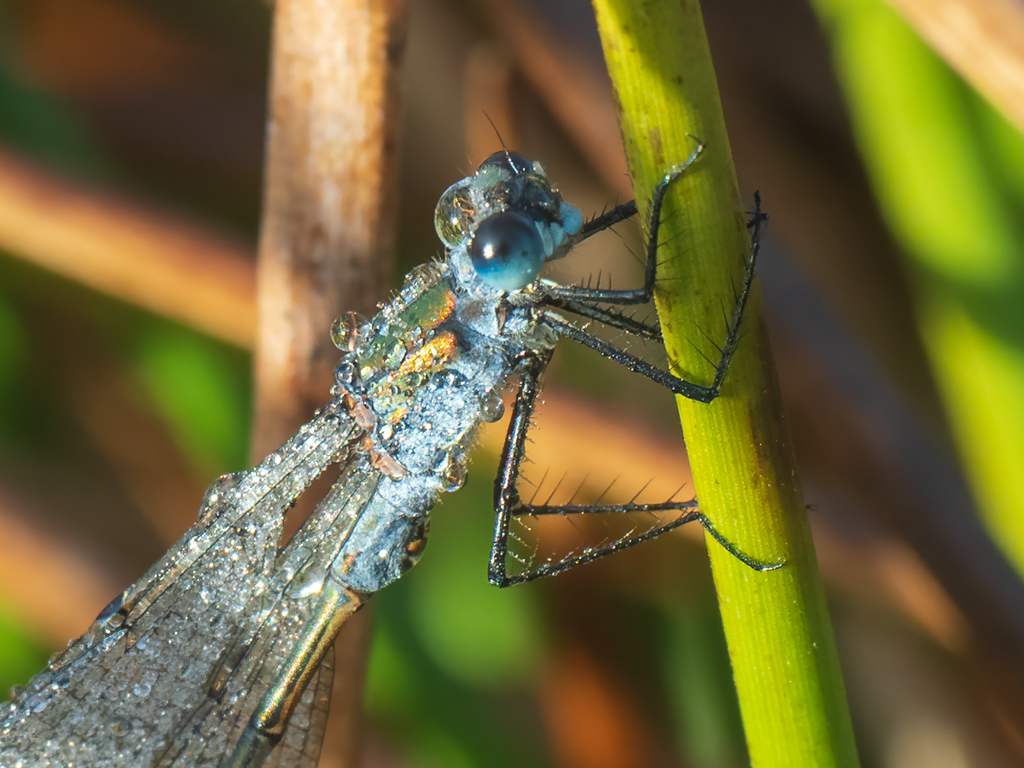 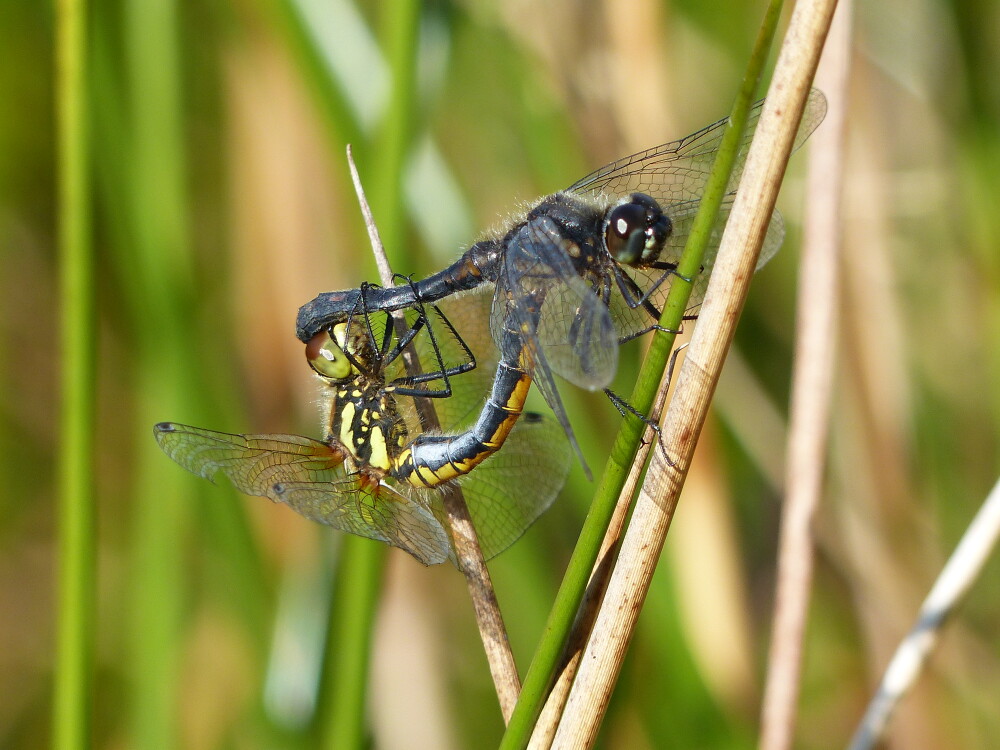 All this fabulous autumnal weather means there are still a good number of dragonflies about. Miles Leach was enjoying the sunshine on Monday at Boyne Water on Brown Clee and reports dozens of Black Darter (photo left) mating and ovipositing. He also took these lovely shots of Brown Hawker (below left) and Common Hawker (below right) females ovipositing. The yellow costa (leading edge of wing) is really striking in the Common Hawker. Amongst the other species seen were Southern Hawker, Emerald Damselfly and Common Darter- a great September day! 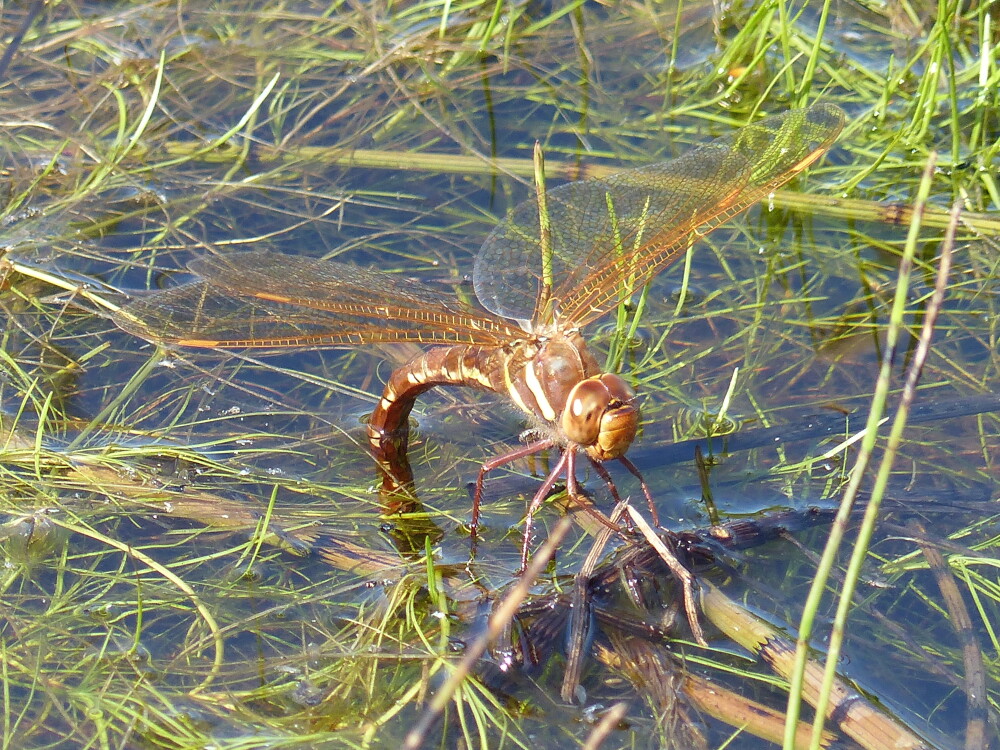 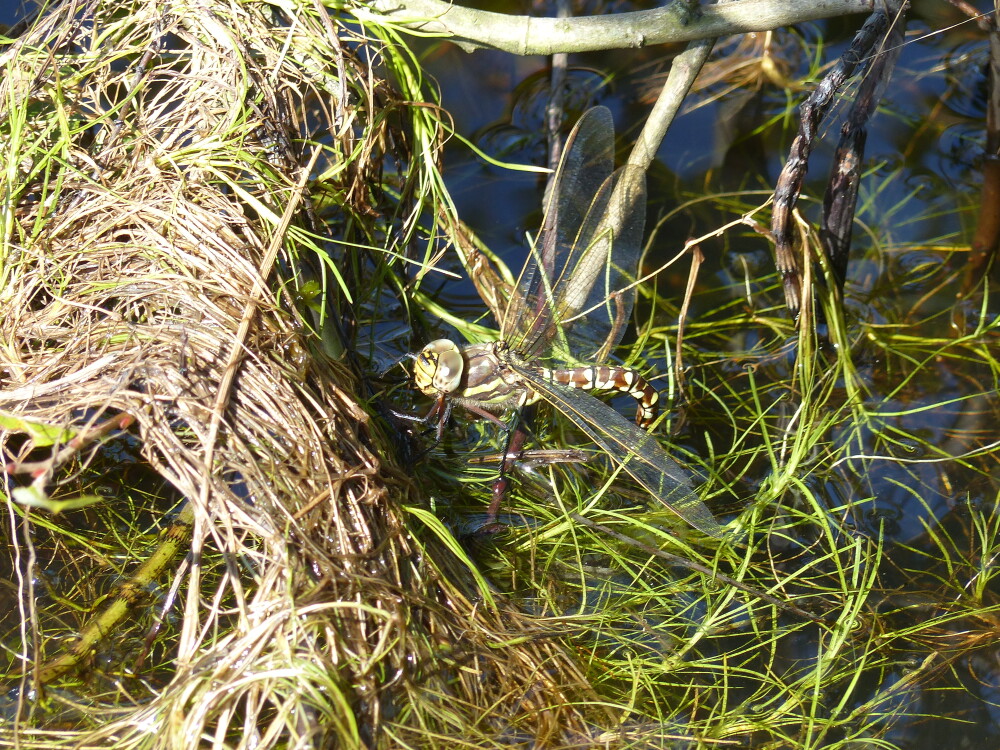 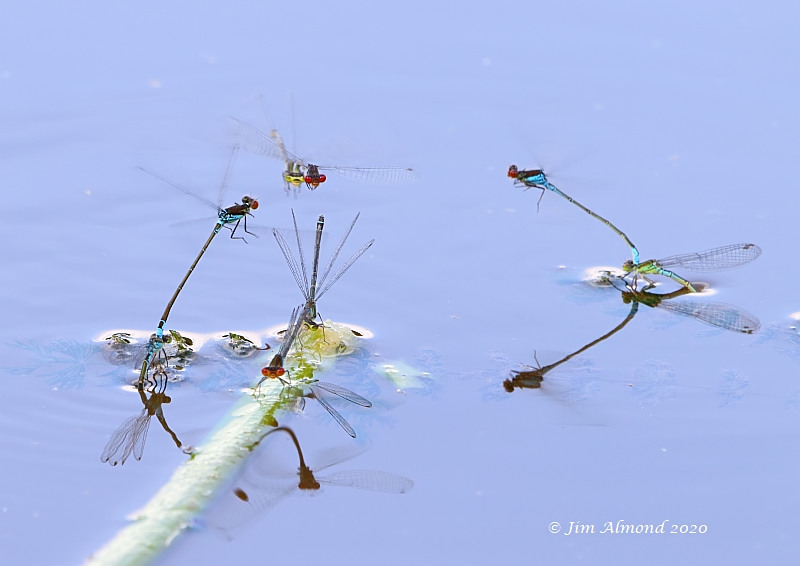 Jim Almond has been back to Dudmaston and taken these fabulous photos of Small Red-eyed Damselfly seen in good numbers on the main pond. Jim saw lots of copulating pairs perhaps making the most of the warmth before this very autumnal turn in the weather! It’s really great to see this new Shropshire species for the second year running and all this activity bodes well for the future population at Dudmaston. 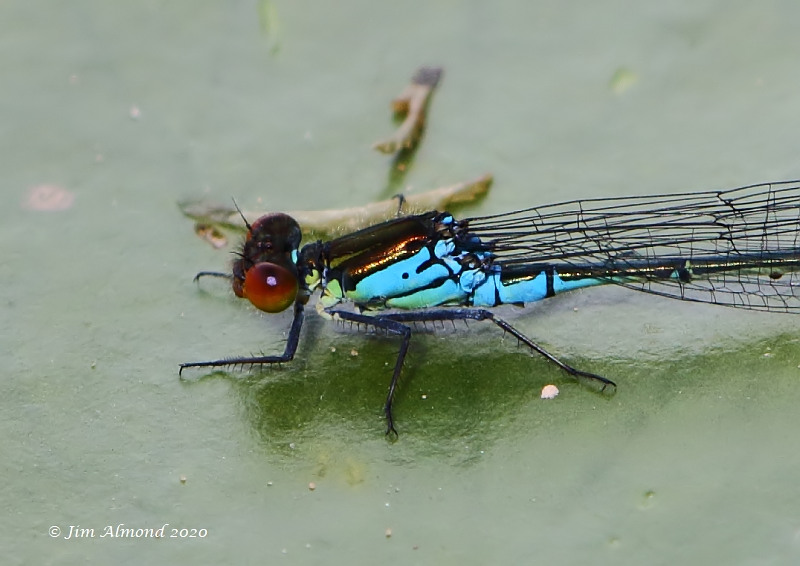 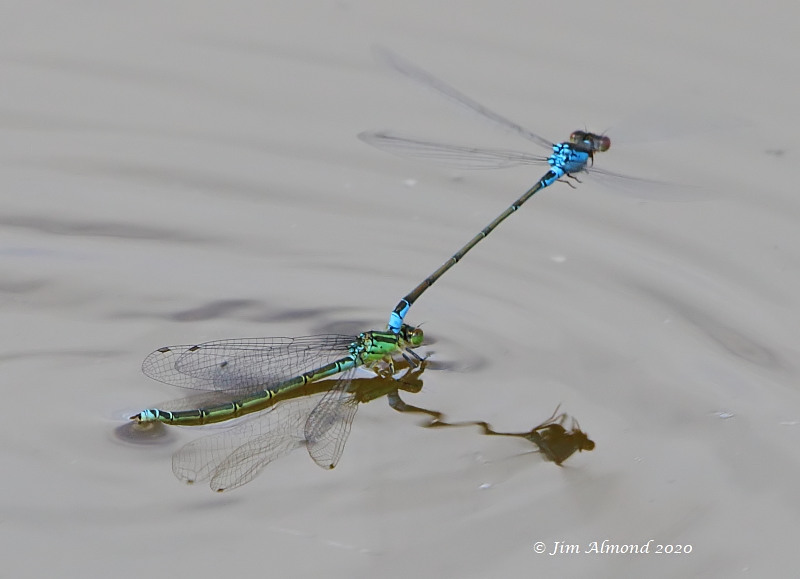 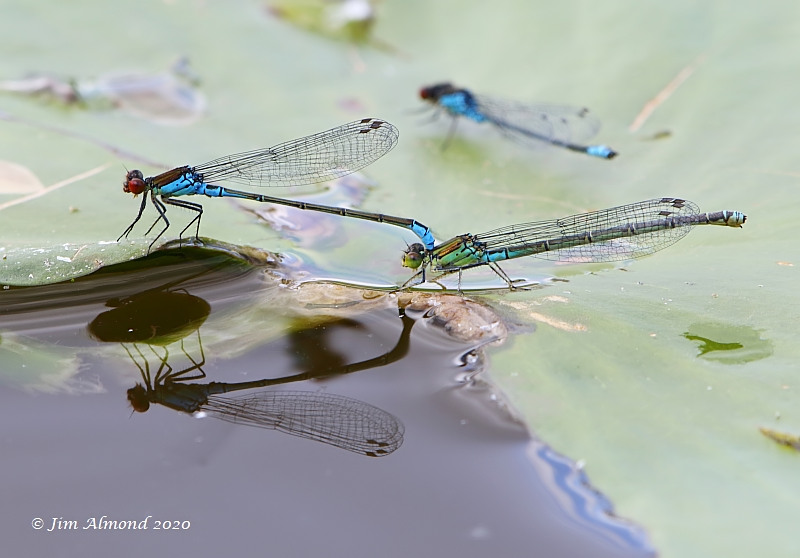 Coping with the torrid heat of Shropshire… 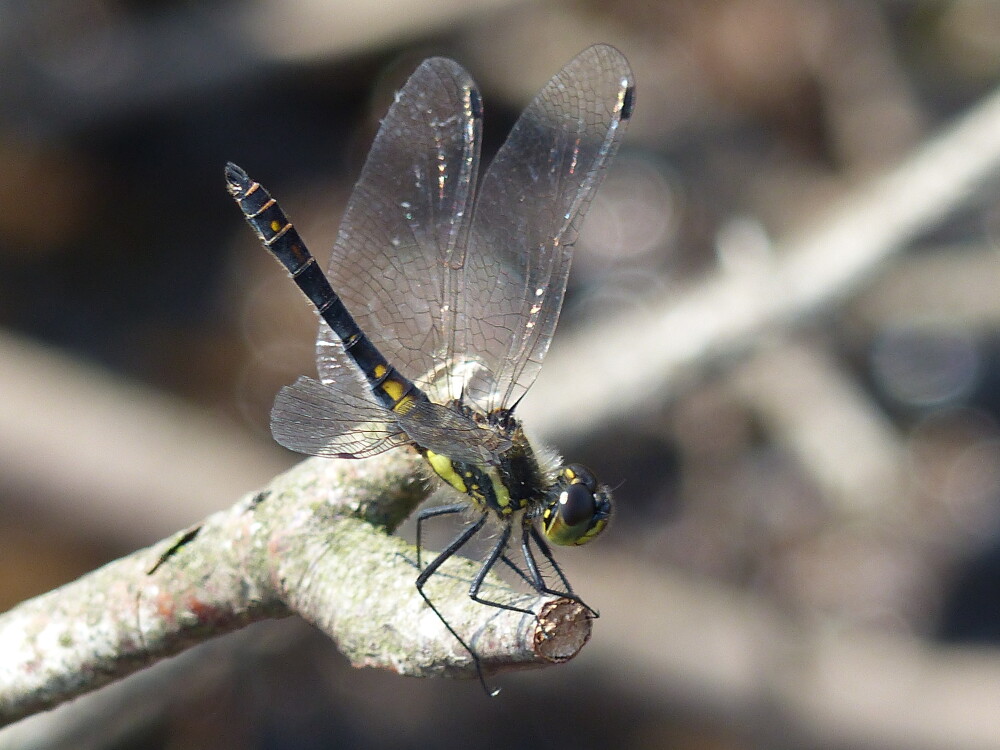 Who’d have thought you could get too hot up on the Longmynd? Miles Leach has taken this great shot of a Black Darter male obelisking at Pole Cottage Pools. Usually such black coloration helps to absorb the suns heat, but on those very occasional hot August afternoons things can get too much and so the abdomen is directed toward the sun  reducing the surface area exposed to the full impact of the rays.

Elsewhere Miles was surprised to see his first Common Hawker (male shown below) near Tugford, some distance from the acidic pools of Brown Clee Hill. Seen hawking for insects near a stream, this male had fairly opaque wings illustrating it’s recent emergence and perhaps explaining why it was keeping a distance from more typical (and competitive) habitat areas until mature. 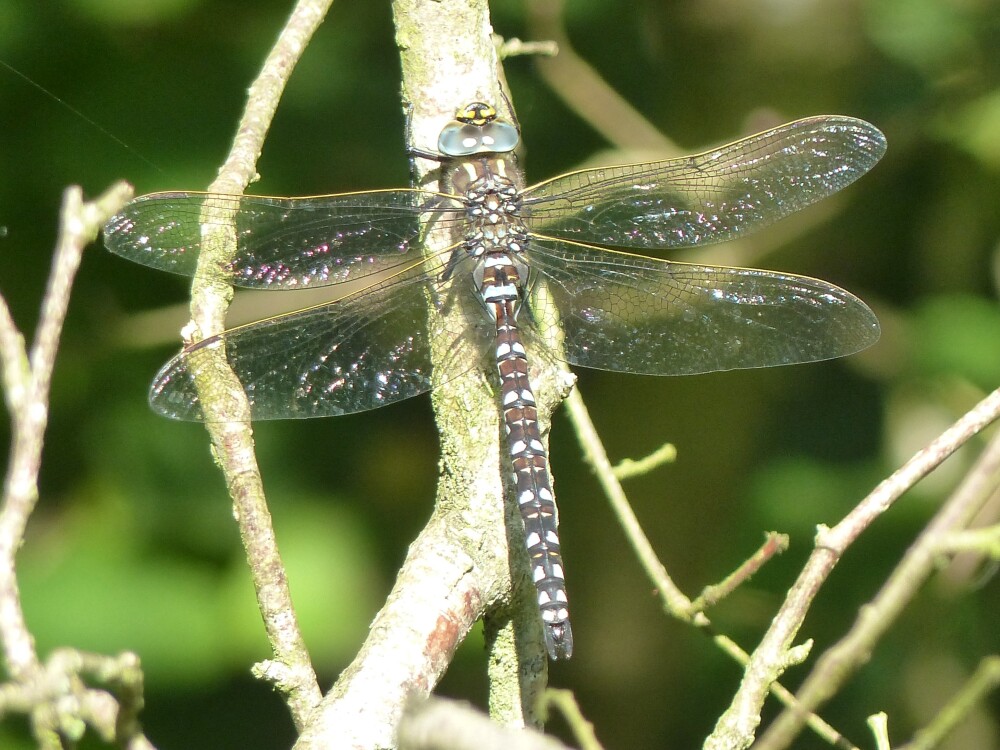 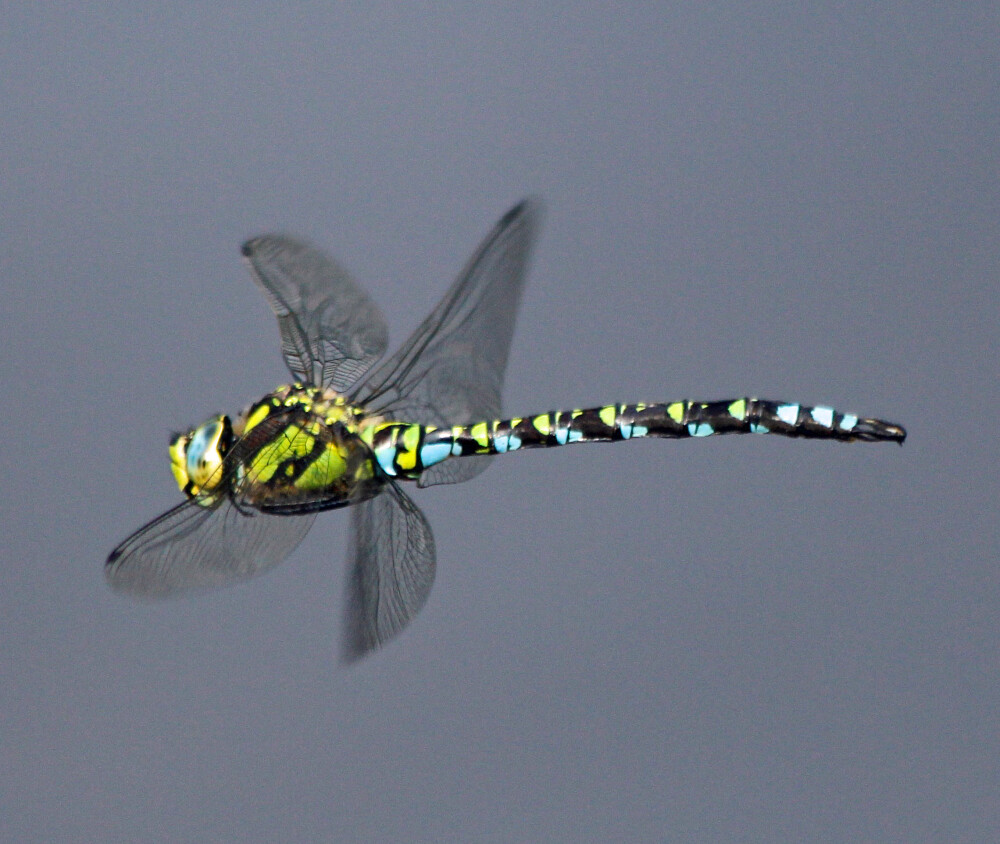 Jan Shields has sent in this stunning in flight shot of a Southern Hawker taken at Mousecroft Pool near Shrewsbury. Unfortunately numbers and abundance of species appears to be low possibly due to disturbance from current works going on in and around the pond. Southern Hawker is often a regular at garden ponds and back at Jan’s own pond Common Darters were emerging. These photos illustrate some of this extraordinary process and it’s amazing to see how much the abdomen extends once pulled out of the exuvia. 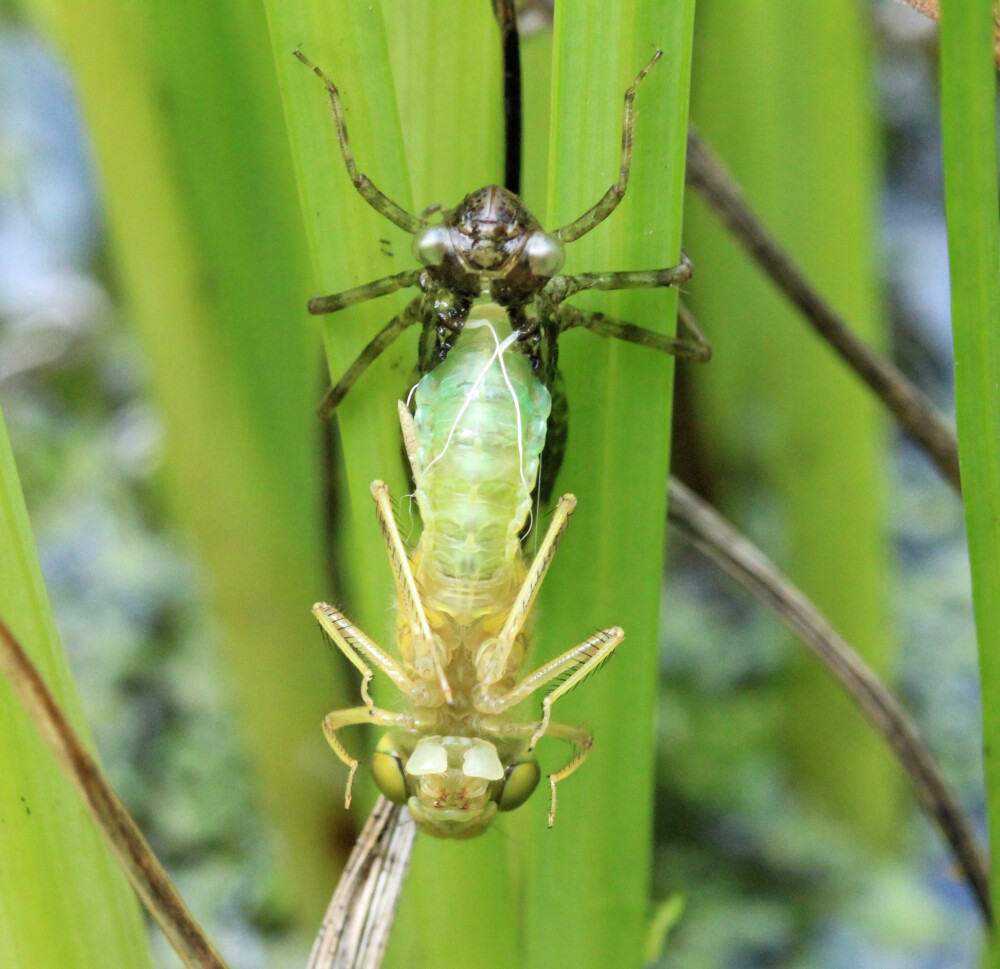 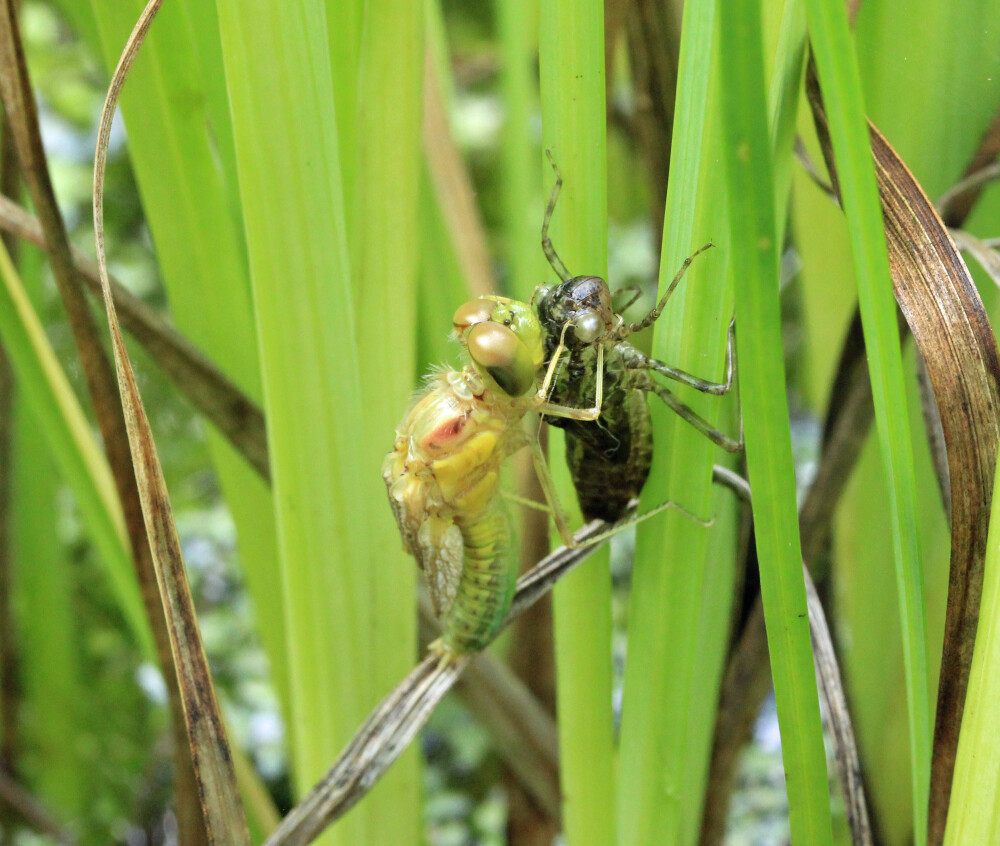 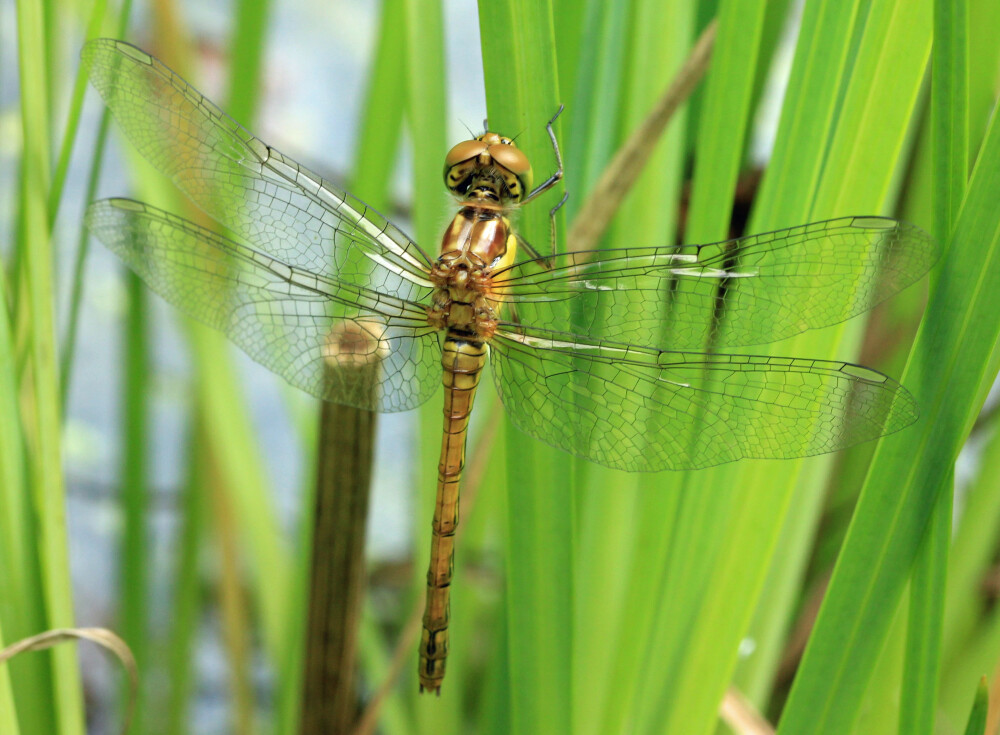 Migrant Hawker on the wing… 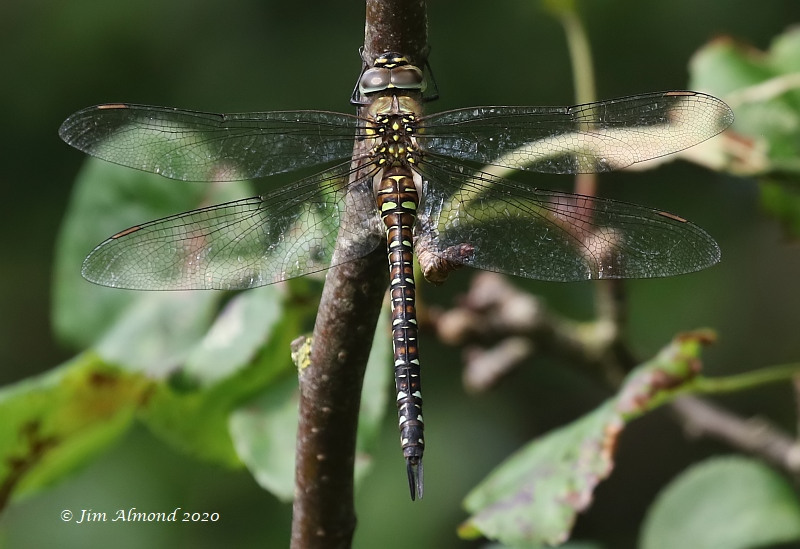 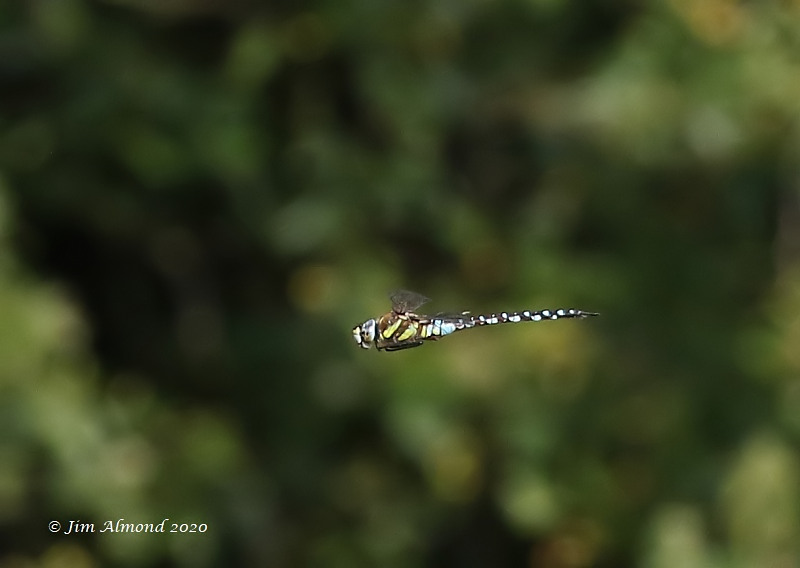 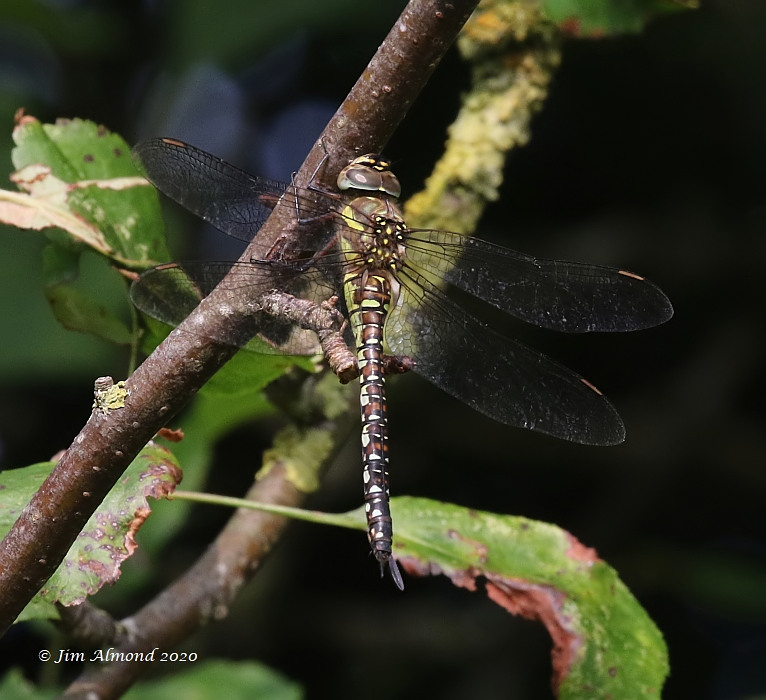 Update on the broad brood… 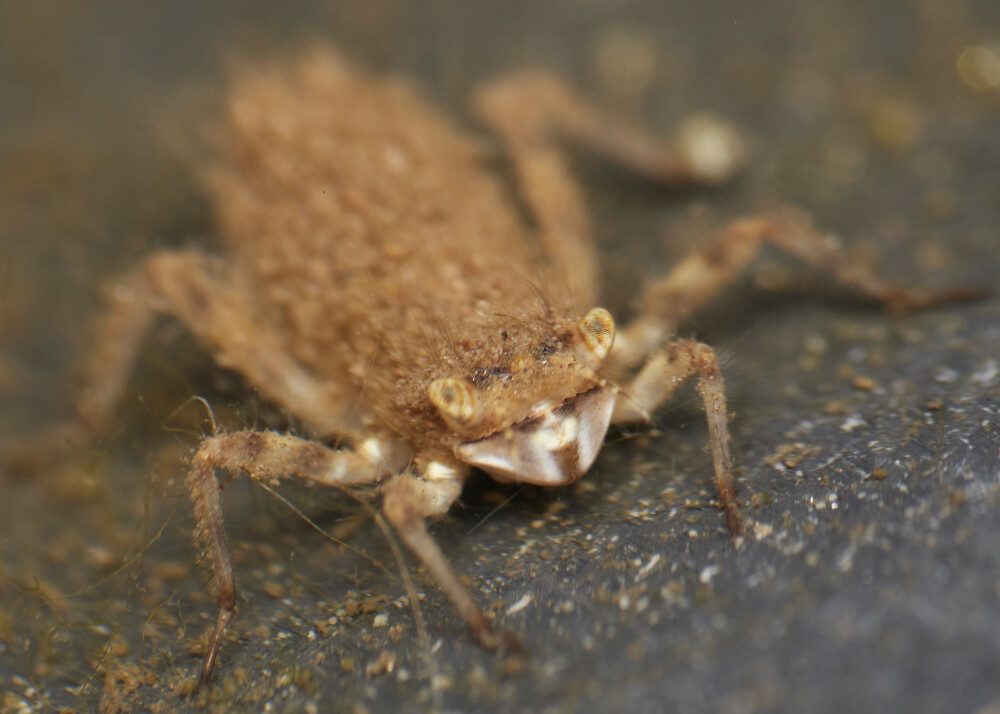 David Williams has sent in some great photos of the Broad-bodied Chaser larvae that he has been following in his pond. It’s amazing to see how much they have grown in stature over a short period and are now significant beasts! David says despite being known to dwell in the silt at the bottom of water bodies they are often seen fairly exposed on the shallow edges of the pond clearly visible (below right) above the pond liner. He sees many doing this and it is unclear if these represent the majority or many more are still submerged in the silt. 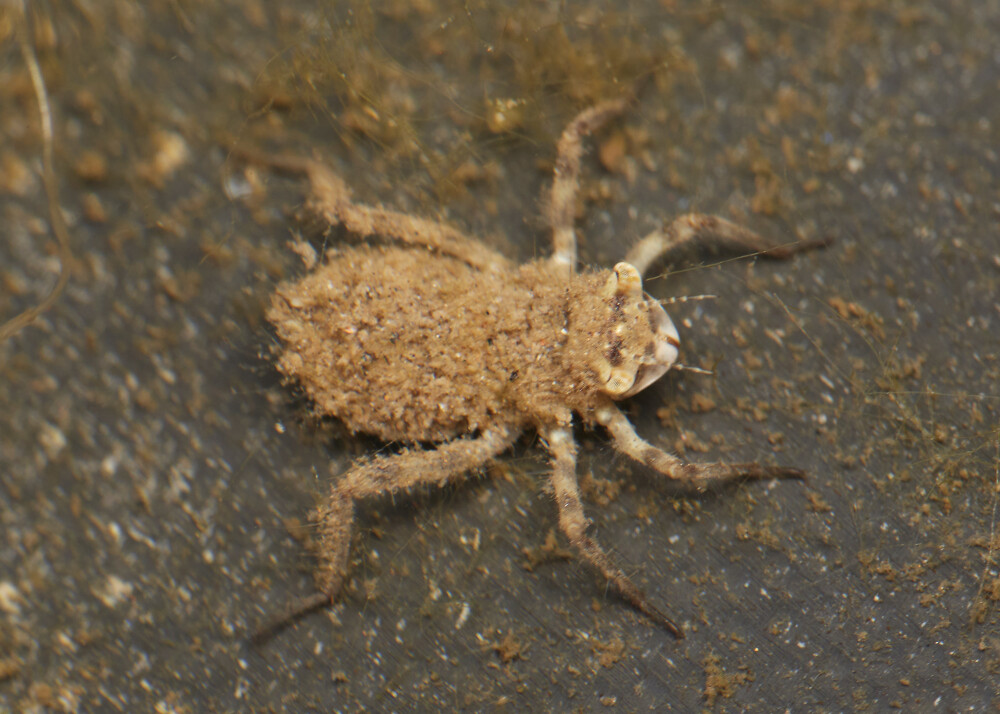 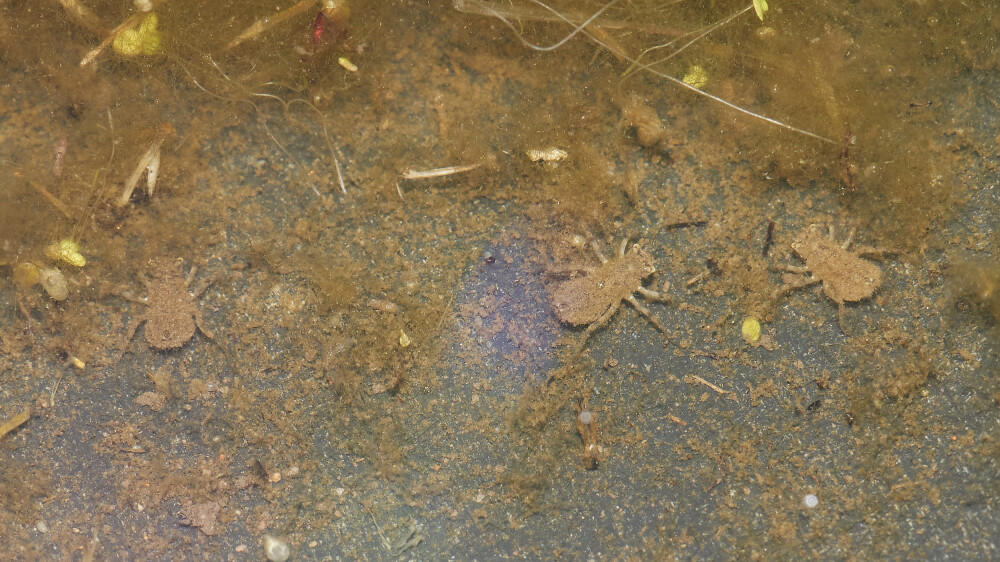 News just in- further sightings of Small Red-eyed Damselfly at Wellfield Fishery, Button Bridge, Wyre Forest. That’s 3 sightings so far this year….keep us posted so we can see how quickly and how far they are spreading across Shropshire.

Darting around on Whixall… 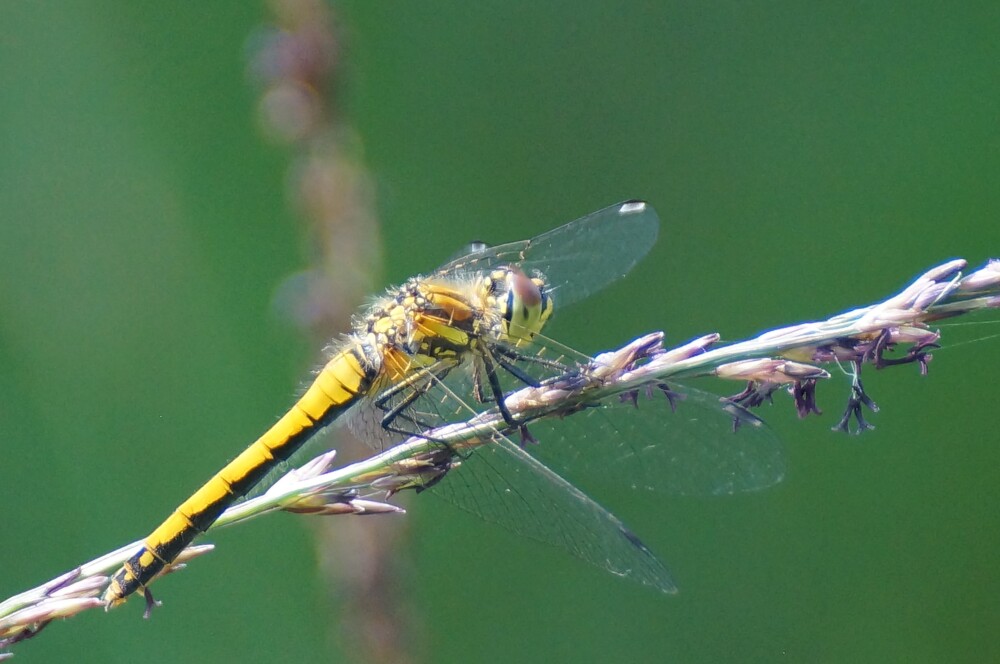 Two lovely photos of Black Darter have been sent in from Whixall Moss and they provide a useful contrast to the Common Darter female pictured in the previous post. The female Black Darter (left) has solid black legs with no yellow stripe, a black triangle on top of the thorax as opposed to antehumeral stripes and she has a distinctive splash pattern of yellow dots on the side of the thorax. The female also has a more stocky and parallel sided shape to the abdomen than the male black darter -seen below left. 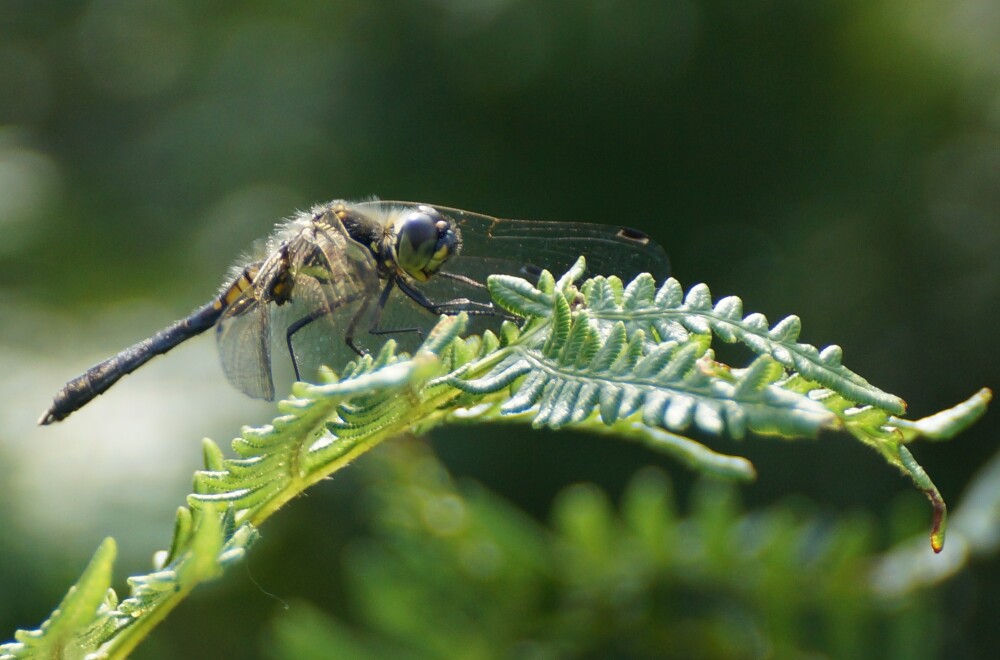 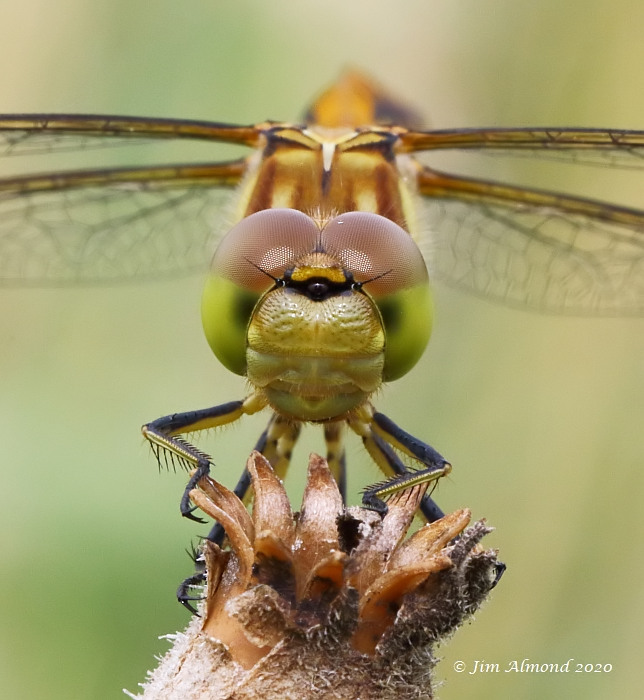 Jim Almond has been enjoying the darters in the surrounding fields at Venus Pool and has sent in these amazing close ups of a female Common Darter. Such a common and widespread species, but Jim’s photos really capture the fascinating detail. They also show the yellow leg stripe, the antehumeral stripes on top of the thorax and the lack of ‘long moustache’ (frons side line) which collectively tell us it’s a Common Darter. 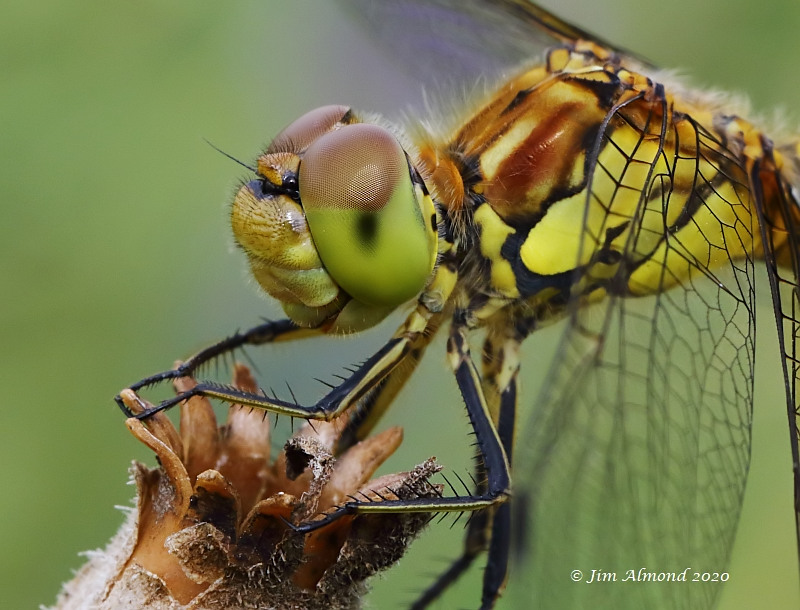 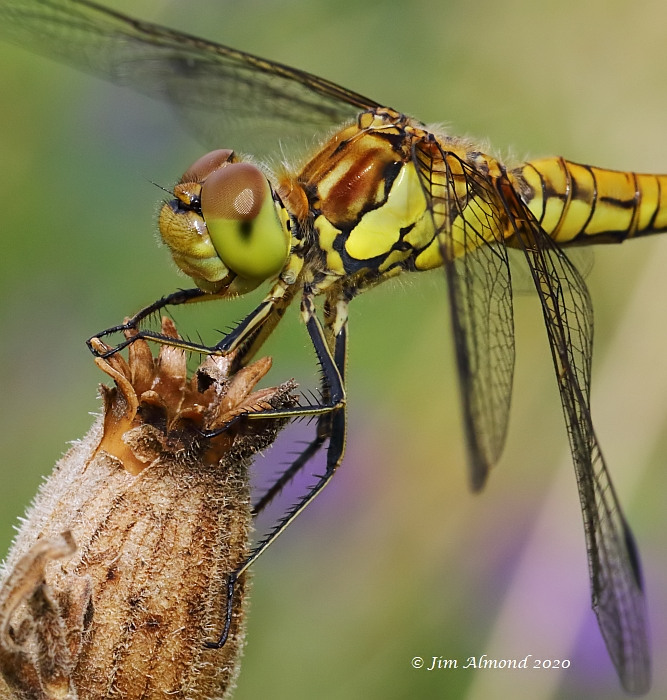